We revisit the Typism Books 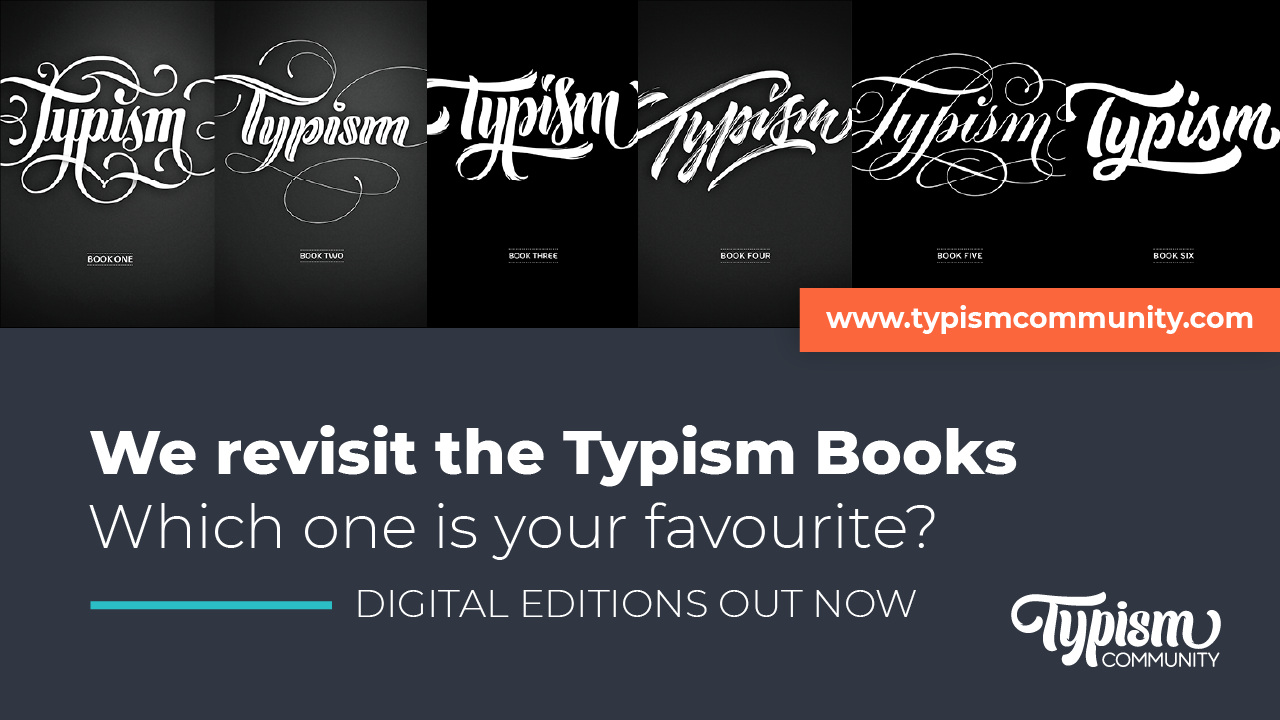 As a lettering artist just starting out, it is tempting to head to Google or Pinterest to find sources of new inspiration, but it’s often the same stuff doing the rounds and there is no way to know whether it is high quality or not.

If the curation is not done by lettering experts, poor examples of lettering are often showcased in inspirational lettering collections online.

If you are looking to poor quality work for inspiration, it is easy to develop bad habits and if you are looking at the same 20 artists over and over again on Instagram, it’s all too easy to be over-influenced by their work. They say imitation is the sincerest form of flattery, but most people find plagiarism of their creative work upsetting, even if it’s unintentional.

Quality and variety is the key to good lettering inspiration, which is one of the reasons why we created the Typism books.

Every year when we organised the Typism conference, it would be great inspiration for the 300 people who could attend in person, but we wanted to find other ways to inspire people who couldn't attend.

We also wanted to showcase the amazing work being done by lettering artists around the world, from countries like Russia, Ukraine, and the Netherlands, and so the idea for the Typism book was born.

At first, the books were only available in a printed edition, but we recently conducted a survey and you told us loud and clear that you wanted digital versions, especially as Books One, Two, and Three are now out of print. Add to this the difficulties with international shipping to some countries during COVID and the concept of a digital edition was a clear winner.

For a short time only, you can grab all six editions of the current Typism books in high resolution digital format for just $67. Click here to grab over 1000 pieces of curated inspiration for almost half the retail price.

With the release of the Typism digital books, we thought we would travel back in time and take a look at each of the six books in more detail and showcase some of our favourite works.

The initial idea with the Typism books was to produce them as a print-on-demand book because there was no money for a print run, but once artists like Luca Barcellona and Jon Contino submitted their work, it became clear that we needed to raise money to print them properly.

This is one reason for the small pocket size of the book and also the fact that all the artwork is in black and white. We needed the print cost to be affordable and the size economical to post.

Aurelie Maron was one of the speakers at the first Typism conference and she designed the first Typism logo which is what you see on the cover of Book One. We explored printing overseas, but decided to print locally so that we could organise paper sponsorship and keep a closely on print quality. We knew the artists in the book would be super focused on the print and paper quality, so we felt paying extra was worth it. 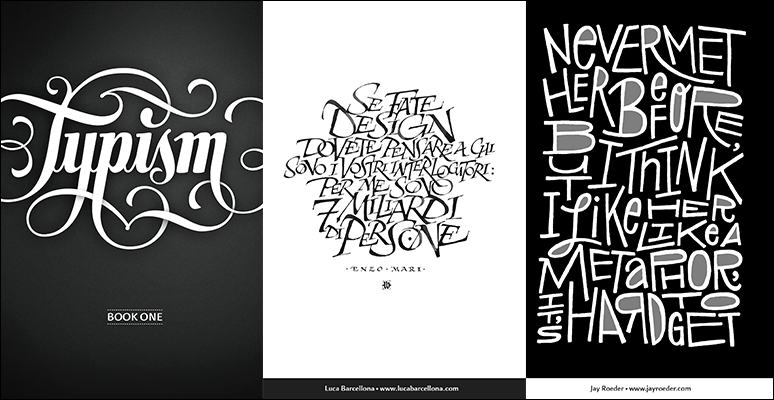 Once the first book was released, it sold out fairly quickly and when we started making plans for a second Typism conference, it became clear that we needed to think about the second book as well.

We put the word out on social media as well as inviting the artists from the first book to submit work again, which many of them did. The artists were so excited to have their work included in the book, they wanted that rush of excitement again, and as the word got out about the book via the now infamous Typism Book Selfie, we had no problem attracting submissions.

The logo became a problem because we couldn’t put the first one on the cover again, so it was decided to design a new logo, just for Book Two. Libbi Reed collaborated with Wayne Thompson on the second logo, and once again, we printed the book locally and it sold out quickly. 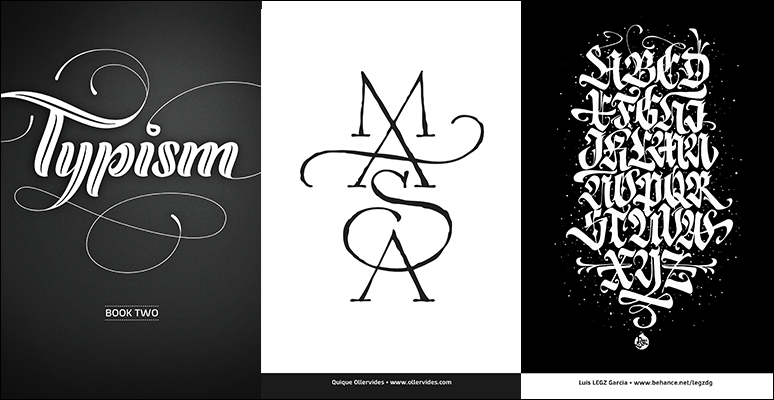 For Book Three, we went back to Aurelie Maron for a new logo to put on the cover and we decided to increase the print run because the word was getting out about the book and we didn’t want to sell out so quickly.

We doubled the print run and ramped up the pre-order. The Typism Book Selfies were becoming a tradition now for anyone with work in the book and it quickly became our favourite part of the whole process.

We also released a special limited edition version of the book for contributors only in a partnership with BJ Ball papers and letter-pressed a white varnish into their black cover stock. Ooh, so fancy. 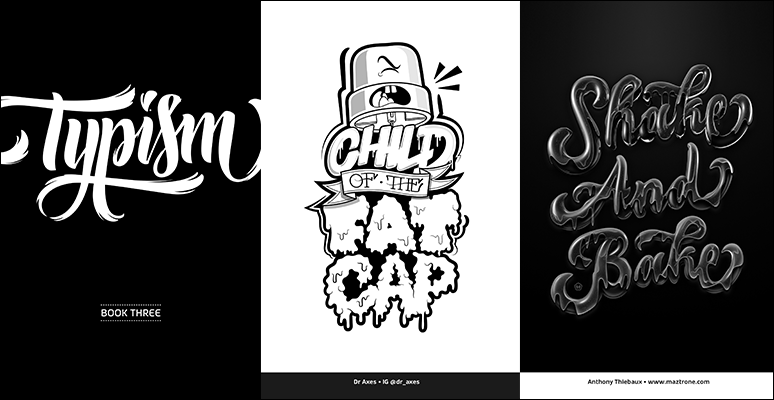 The logo for Book Four was designed by another Typism conference speaker, Matt Vergotis. He made use of his signature energetic hand lettered style.

The word was starting to get out about the books now, so we were seeing some amazing submissions and so the judging panel had to get super picky about the work they were selecting.

Due to postage costs, we can’t afford to make the book any thicker, much as we would like to, so book four was where we really started to reject high quality work, just because it might have a similar style to other works in the book, or if it said something similar. We only wanted to print one of each saying or style, so we rejected a lot of calligraphy circles and “strength in letters” that year. 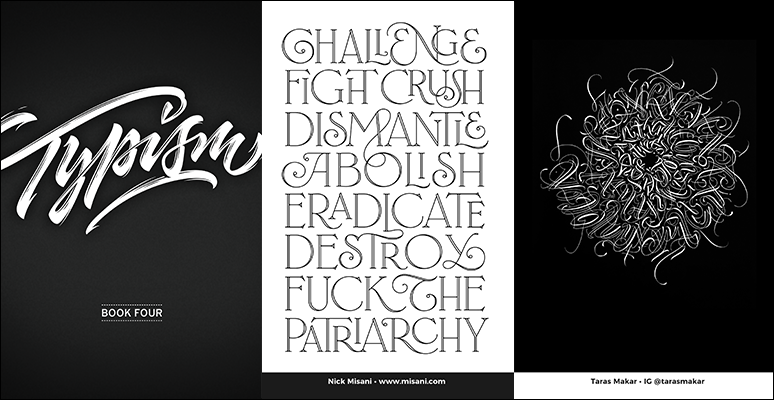 The story behind the logos for Book Five and Six started at the Creative South Conference in Georgia where Typism founder Dominique Falla gave a keynote speech and met many of the people she’d been following over the years in real life.

Two of the people she met at the conference were friends Colin Tierney and Daniel Palacios, who had both appeared in the books and both wanted to create logos for the cover of the next book.

Colin and Daniel duked it out, with Colin Tierney winning the chance for book five and then Daniel was promised Book Six. Colin deviated from his usual crayligraphy style and created this flourishing beauty for the cover of Book Five. 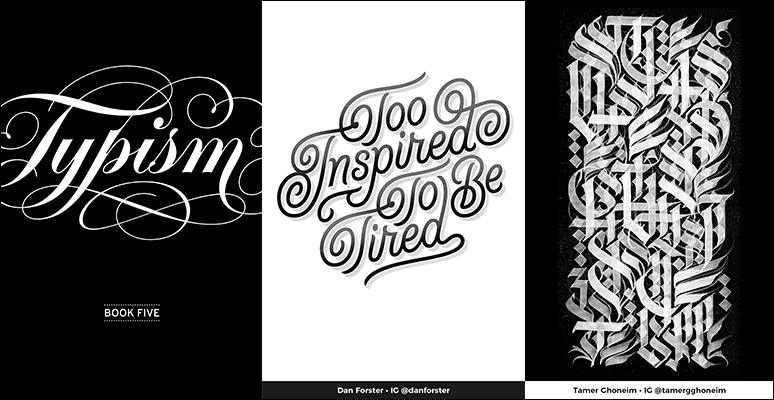 One year later and it was Daniel Palacios' turn to create a logo for the cover and he went against the flourishing logo trend to create a clean retro look for the book.

We ran into some trouble with the shipping of Book Six because COVID restrictions meant lots of the countries Australia Post shipped to went dark for a while. The COVID situation is pretty much under control in Australia, but unfortunately many of the countries we were shipping to were not, which is how the digital books came into existence.

We were originally going to only produce Book Seven in a digital format but everyone we spoke to demanded we re-publish the first six books digitally as well so that people who missed out on earlier editions can get their hands on them. 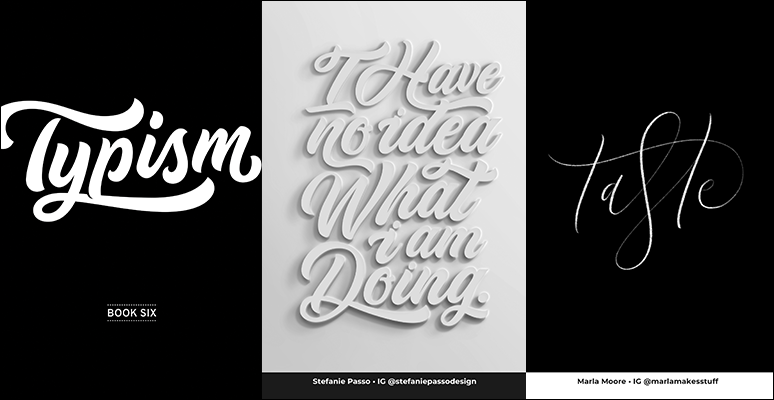 Ambigram master Nikita Prokhorov was tapped on the shoulder to create the logo for Book Seven and of course he created a slick Typism ambigram.

We’ve also put the BOOK SEVEN text up both ways so that when you get the physical book you can turn it round and read it both ways like a true ambigram cover. The book is currently at the printers and should be available at the end of April, early May 2021. 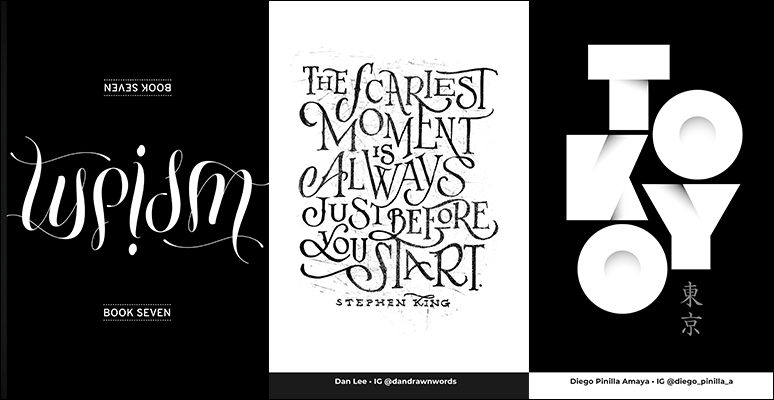 As we went through the artwork to repackage them as digital books, we began to notice some repeat offenders—people who always seemed to pop up in every edition. We went through and tried to find people who had appeared in all seven books and discovered there were eight of them. In the coming weeks, we will do a feature on the magnificent seven and showcase their work.

Some people stuck with the same style throughout and others experimented with lots of different styles. Can you guess who might be in every edition? 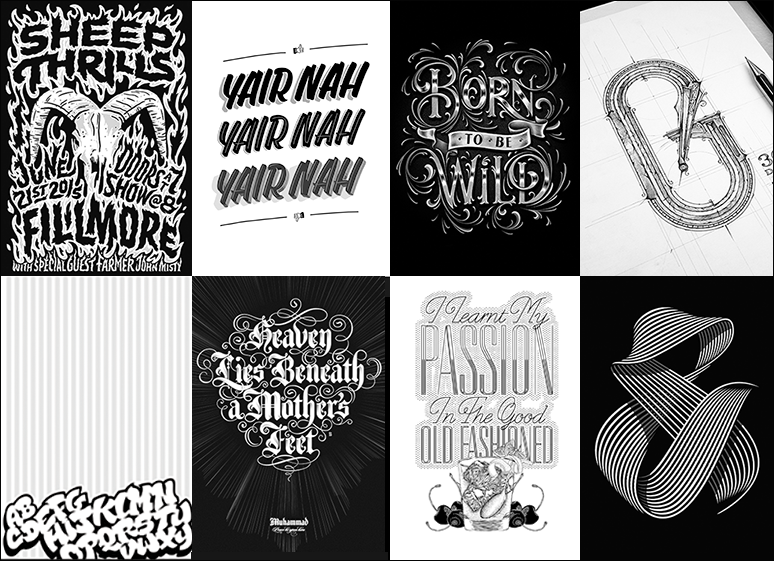 So who will be creating the logo for the cover of Book 8 we hear you ask? Well they are already working on the logo now but we will keep their identity under wraps until October when we launch the call for entries for the next book. Gotta give you guys something to look forward to.

So that's it for the flashback. We hope you enjoyed taking a trip down memory lane.

How great would it be to open a folder on your computer and have instant access to over 1000 pieces of work in as many different styles as you can imagine by some of the best lettering artists in the world? Well with the Typism Digital Book Bundle, for the first time in history, the first six Typism books are all available to download, right now.

Head over to the Typism Digital Book Bundle page and grab over 1000 pieces of inspiration for just $67.

Which Typism book is your favourite?